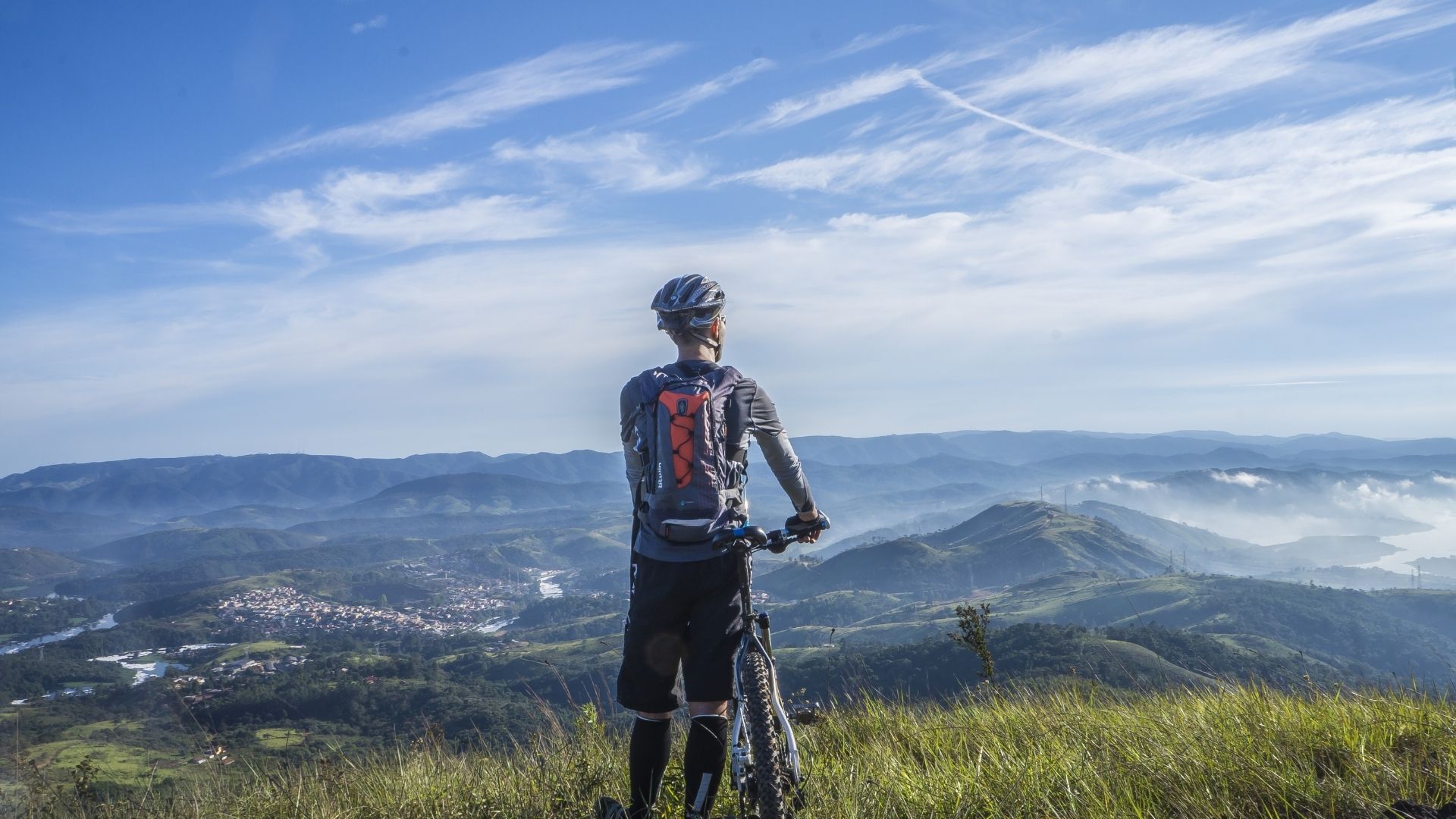 How a prostate cancer survivor learned that sometimes less is more Jim Doilney, 74, runs on a trail in Park City on Tuesday, June 7, 2022. Doilney was diagnosed with prostate cancer in 1999 and recently wrote a memoir called “Riding the Scalpel.” Photo by Kristin Murphy, Deseret News.

Twenty-four years ago, Jim Doilney discovered he had prostate cancer.

Since some 250,000 American men are diagnosed with prostate cancer every year, this was not exactly stop the presses news, although it was rare for someone as young as Jim —he’d just turned 50 — to join the club no one wants to join.

His diagnosis was yet more evidence that cancer is no respecter of persons — or of physical health and fitness. Jim took care of himself, he watched what he ate, he ran marathons, he climbed mountains, he rode his bicycle the length of Mexico, he skied the Cotopaxi volcano in Ecuador, all 19,347 feet of it. Journeys on roads less traveled to out of the way places was his go-to hobby. He liked to test his limits.

Cancer trumped all the quests and the limits; it put him on a journey he’s still on, at 74. 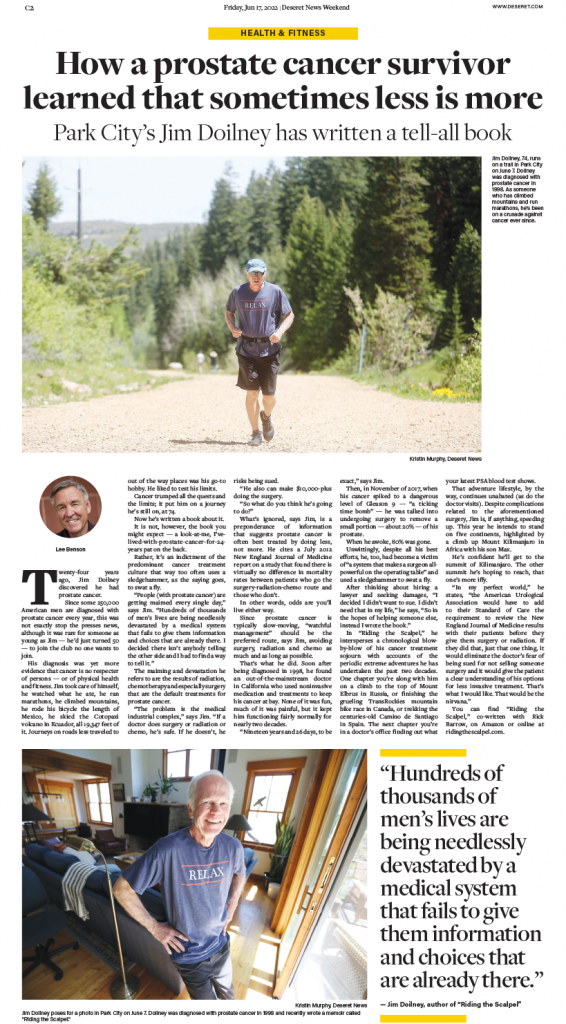 Now he’s written a book about it.

It is not, however, the book you might expect — a look-at-me, I’ve-lived-with-prostate-cancer-for-24-years pat on the back.

Rather, it’s an indictment of the predominant cancer treatment culture that way too often uses a sledgehammer, as the saying goes, to swat a fly.

“People (with prostate cancer) are getting maimed every single day,” says Jim. “Hundreds of thousands of men’s lives are being needlessly devastated by a medical system that fails to give them information and choices that are already there. I decided there isn’t anybody telling the other side and I had to find a way to tell it.”

The maiming and devastation he refers to are the results of radiation, chemotherapy and especially surgery that are the default treatments for prostate cancer.

“The problem is the medical industrial complex,” says Jim. “If a doctor does surgery or radiation or chemo, he’s safe. If he doesn’t, he risks being sued.

“So what do you think he’s going to do?”

What’s ignored, says Jim, is a preponderance of information that suggests prostate cancer is often best treated by doing less, not more. He cites a July 2012 New England Journal of Medicine report on a study that found there is virtually no difference in mortality rates between patients who go the surgery-radiation-chemo route and those who don’t.

In other words, odds are you’ll live either way.

Since prostate cancer is typically slow-moving, “watchful management” should be the preferred route, says Jim, avoiding surgery, radiation and chemo as much and as long as possible.

That’s what he did. Soon after being diagnosed in 1998, he found an out-of-the-mainstream doctor in California who used noninvasive medication and treatments to keep his cancer at bay. None of it was fun, much of it was painful, but it kept him functioning fairly normally for nearly two decades.

Then, in November of 2017, when his cancer spiked to a dangerous level of Gleason 9 — “a ticking time bomb” — he was talked into undergoing surgery to remove a small portion — about 20% — of his prostate.

Unwittingly, despite all his best efforts, he, too, had become a victim of “a system that makes a surgeon all-powerful on the operating table” and used a sledgehammer to swat a fly.

After thinking about hiring a lawyer and seeking damages, “I decided I didn’t want to sue. I didn’t need that in my life,” he says, “So in the hopes of helping someone else, instead I wrote the book.”

In “Riding the Scalpel,” he intersperses a chronological blow-by-blow of his cancer treatment sojourn with accounts of the periodic extreme adventures he has undertaken the past two decades. One chapter you’re along with him on a climb to the top of Mount Elbrus in Russia, or finishing the grueling TransRockies mountain bike race in Canada, or trekking the centuries-old Camino de Santiago in Spain. The next chapter you’re in a doctor’s office finding out what your latest PSA blood test shows.

That adventure lifestyle, by the way, continues unabated (as do the doctor visits). Despite complications related to the aforementioned surgery, Jim is, if anything, speeding up. This year he intends to stand on five continents, highlighted by a climb up Mount Kilimanjaro in Africa with his son Max.

He’s confident he’ll get to the summit of Kilimanjaro. The other summit he’s hoping to reach, that one’s more iffy.

“In my perfect world,” he states, “the American Urological Association would have to add to their Standard of Care the requirement to review the New England Journal of Medicine results with their patients before they give them surgery or radiation. If they did that, just that one thing, it would eliminate the doctor’s fear of being sued for not selling someone surgery and it would give the patient a clear understanding of his options for less invasive treatment. That’s what I would like. That would be the nirvana.”

You can find “Riding the Scalpel,” co-written with Rick Barrow, on Amazon or online at ridingthescalpel.com.